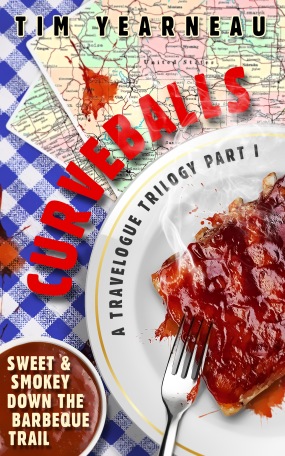 Yeesssss! My books have arrived. A box full of the paperback version of my book, Curveballs: Sweet & Smokey Down the Barbeque Trail. Christmas has come early!

Not just showed up, but showed up early! Yes, you read that correctly. They were supposed to arrive on January 5, 2016, which seems soooo long away. But my brother said, “Yeah, a box with your name showed up on the front steps today. It’s kind a heavy. Are those your books?”

“Why yes they are!” I replied, not know what to do with myself. The giddiness within grew and bloomed like a flower just stung like a bee. I grabbed the nearest knife and sliced that sucker open in a one-stop motion. Whala! They’re they were. A thing of beauty if I ever saw one.

I frantically called and texted my friends, the ones who’d been asking me about this for weeks. “My books just arrived. I make house calls! I deliver!” I shouted in my texts and voicemails.

AWESOME!!!! came back the reply. Awesome indeed. And I whipped over to West Side Perk, the coolest little coffee shop this side of 35W and plopped them in her shop, ready for sale. I’d been talking to the owner, Debbie, about this moment for a couple of years.

“When you get your book done you can put it in my shop,” she would always say to me.

So today I got to tell her, “They’re here!” Smiles bounced off every wall in the shop. I can’t even describe how I feel. It’s too cool to even attempt it. Well, gotta go now. I need to go blab to somebody else about what showed up on my front step today. So cool!

P.S. In case you’re wondering, and I’m guessing you aren’t, but just in case, I did leave ONE little error in my book on purpose. There’s a method to my madness. You’ll see. Think you can find it?

nothing on my blog is to be taken too seriously. sooo please leave any mean, abusive comments in the jar. oh, before I forget, it doesn't hurt to keep comments short either. 😃