I recently chowed down on a half slab of ribs at Old Southern BBQ at 44th and France in Edina, Minnesota with my friend Tom, A.K.A. Talking Tom. As usual we chatted about many things while slugging down those ribs. From work to tennis to Simon Greenleaf (the famous Harvard Law Professor) to ribs to Famous Dave’s.

I had visited here about 2 weeks ago and learned that Dave Anderson, of Famous Dave’s fame had a hand in this, that this restaurant was the 4th to open and was a subset of Famous Dave’s. Or so I thought.

I noted to Tom how the ribs I had a week earlier were a more brown muddy color and fall off the bone, as in fall off the bone. At that time, internally, sprouting from my own internal thought process I had declared them to be on par to Mark’s Feed Store in Louisville, Kentucky. And if you’ve read my posts or my book, Curveballs: Sweet & Smokey Down The Barbeque Trail, you know they are at the top of my list.

The ribs today were a little different, and closer to what I might get at Famous Dave’s, which made sense since this was an offshoot of them. So I thought. Tom and I talked about this, the differences between Famous Dave’s and Old Southern BBQ. We dissected the ribs, muffins, beans, mashed potatoes, potato salad, and rice too!

Here at Old Southern BBQ the muffins are muffin tops, i.e., just the tops of the muffins. Interesting, I thought, and rather ingenious, and soooo good. Tom didn’t like the rice, and he gave a slight edge to Famous Dave’s because he like their sides a little better. That’s one consistent feature of Famous Dave’s. Their sides rock! Those muffins the serve are beyond delicious, and their beans and corn and potato salad and coleslaw, oh my goodness.

Her words jumped and contained great enthusiasm. And this is what we learned. Famous Dave, as in Dave Anderson, has nothing to do with Famous Dave’s anymore. He owned just one Famous Dave’s Restaurant, and that burned down. He wanted to get skin in the game so decided to open up a restaurant based on his own childhood recipes. And thus, Old Southern BBQ was born. It’s there goal to experiment, why may explain why the ribs I tasted a week ago were a bit different than now, and I love the idea of trying new ideas and recipes. 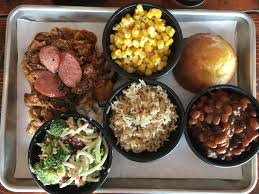 Tell me that ain’t the greatest muffin ever. Look at ’em. We dove into the finer details of those muffin tops and agreed that a lot of people only really eat the top, that’s the best tasting, gooey, bendable, crunchy part of the muffin. I routinely eat only the tops of muffins, and cake and cupcakes too. I rip off the part with the frosting and gulp them down. Same with muffins. This got to the heart of the thinking of Old Southern BBQ.

I love that at Old Southern BBQ they are experimenting, and that Famous Dave himself is getting skin back in the game, and he’s coming with all 8 cylinders firing. It’s a win Talking Tom and Me, and you too…for all of us. Go get ’em tiger!

nothing on my blog is to be taken too seriously. sooo please leave any mean, abusive comments in the jar. oh, before I forget, it doesn't hurt to keep comments short either. 😃